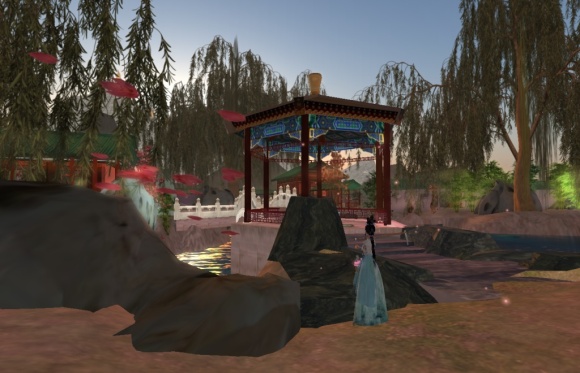 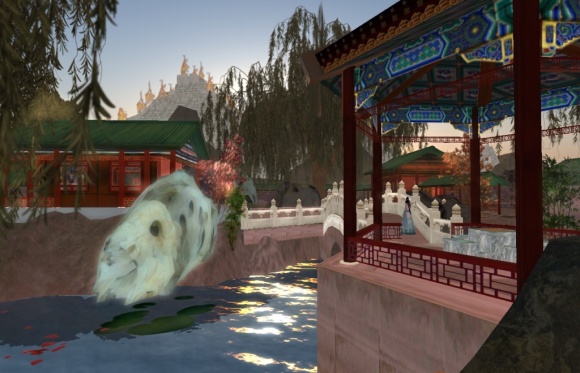 “Land of Illusion” construction is designed to visualize the imagery and philosophy indicated by Cao Xueqin’s novel A Dream of Red Chambers. It consists of “Grand View Garden”(East Unit), “Red Chambers Courtyard” (West Unit), and “Underwater City” (Underground Unit), those server for a particular purpose conceptually or visually.

The narrative of the machinima is the development of the climax in the classic Chinese novel, which depicts the main character, Lady Daiyu was wandering in the Grand View Garden during a spring day, and became deeply grieved by seeing the flowers descending and withdrawing rapidly from their prosperity,  that seemingly predicted the fate of her own and the unavoidable decline of the noble family leading an extravagant lifestyle.

“The work,” Lily states, “as usual, not only illustrate the original plot, instead, it observes and directs questions towards the current social environment. In our view, meditation and examinations upon the contemporary issues require profound understandings of the particular culture, its unique history and traditions. A social pattern that will be universally applicable perhaps only exists as a hypothesis. Cao Queqi’s A Dream of Red Chambers is not only remarkable for its aesthetic value, its huge cast of characters and psychological scope, more importantly, it observes the life and social structures of China precisely and comprehensively, therefore provides a foundation for building perception or launching relevant inquiries towards Chinese societies globally. This is the very reason we consider Cao’s novel as the primary inspiration of our virtual reality project.”

“In the macrocosm, The Story of the Stone (or A Dream of Red Chambers 红楼梦) seeks to reproduce the visual culture of a world now regarded by its creator with nostalgia and regret. The overriding, structuring image of the world in the novel is the garden paradise, the “Garden of Total Vision” (or Grand View Garden 大观园), which becomes its center. The Garden, however, is a work of art within the larger work of art—the novel. What the adults see as a site for a unique formal occasion, the children will find to be a universe. Indeed, it is a universe: not least because the description of the buildings, promenades, waterways and pools, hills and dales, and most abundantly the plants, symbolically represent all the elements of the environment of a vastly wealthy and privileged gentry family. Its precise detail of the application of theories of aesthetics, cosmology, and horticulture produces a timeless vision of the ultimate garden of the mind.

The Garden of Total Vision (Grand View Garden 大观园) encompasses the world of the protagonists physically and metaphorically… Luxury of fabric and furnishing, objects by famous artists, even objects imported from Europe, persistently embody a world about to collapse, to be re-visioned in later ages only in the pages of the novel. The extraordinary attachment to this world which The Story of the Stone (A Dream of Red Chambers 红楼梦) arouses in its readers relies upon the author’s loving curatorship of the art objects depicted, and aids the reader not only in appreciating the nature of that world, but in achieving liberation from its ultimate illusion.

– The Visual World of The Story of the Stone, Dore J. Levy, Brown University

One reply on “A Dream of Red Chambers（红楼梦）”

The poem in CHAPTER XXVII, which is the direct and primary inspiration of Land of Illusion:
In the Ti Ts’ui pavilion, Pao-ch’ai diverts herself with the multi-coloured butterflies — Over the mound, where the flowers had been interred, Tai-yü bewails their withered bloom.

Flowers wither and decay; and flowers do fleet; they fly all o’er the
skies;
Their bloom wanes; their smell dies; but who is there with them to
sympathise?
While vagrant gossamer soft doth on fluttering spring-bowers bind its
coils,
And drooping catkins lightly strike and cling on the embroidered
screens,
A maiden in the inner rooms, I sore deplore the close of spring.
Such ceaseless sorrow fills my breast, that solace nowhere can I find.
Past the embroidered screen I issue forth, taking with me a hoe,
And on the faded flowers to tread I needs must, as I come and go.
The willow fibres and elm seeds have each a fragrance of their own.
What care I, peach blossoms may fall, pear flowers away be blown;
Yet peach and pear will, when next year returns, burst out again in
bloom,
But can it e’er be told who will next year dwell in the inner room?
What time the third moon comes, the scented nests have been already
built.
And on the beams the swallows perch, excessive spiritless and staid;
Next year, when the flowers bud, they may, it’s true, have ample to
feed on:
But they know not that when I’m gone beams will be vacant and nests
fall!
In a whole year, which doth consist of three hundred and sixty days,
Winds sharp as swords and frost like unto spears each other rigorous
press,
So that how long can last their beauty bright; their fresh charm how
long stays?
Sudden they droop and fly; and whither they have flown, ’tis hard to
guess.
Flowers, while in bloom, easy the eye attract; but, when they wither,
hard they are to find.
Now by the footsteps, I bury the flowers, but sorrow will slay me.
Alone I stand, and as I clutch the hoe, silent tears trickle down,
And drip on the bare twigs, leaving behind them the traces of blood.
The goatsucker hath sung his song, the shades lower of eventide,
So with the lotus hoe I return home and shut the double doors.
Upon the wall the green lamp sheds its rays just as I go to sleep.
The cover is yet cold; against the window patters the bleak rain.
How strange! Why can it ever be that I feel so wounded at heart!
Partly, because spring I regret; partly, because with spring I’m
vexed!
Regret for spring, because it sudden comes; vexed, for it sudden goes.
For without warning, lo! it comes; and without asking it doth fleet.
Yesterday night, outside the hall sorrowful songs burst from my mouth,
For I found out that flowers decay, and that birds also pass away.
The soul of flowers, and the spirit of birds are both hard to
restrain.
Birds, to themselves when left, in silence plunge; and flowers, alone,
they blush.
Oh! would that on my sides a pair of wings could grow,
That to the end of heaven I may fly in the wake of flowers!
Yea to the very end of heaven,
Where I could find a fragrant grave!
For better, is it not, that an embroidered bag should hold my
well-shaped bones,
And that a heap of stainless earth should in its folds my winsome
charms enshroud.
For spotless once my frame did come, and spotless again it will go!
Far better than that I, like filthy mire, should sink into some drain!
Ye flowers are now faded and gone, and, lo, I come to bury you.
But as for me, what day I shall see death is not as yet divined!
Here I am fain these flowers to inter; but humankind will laugh me as
a fool.
Who knows, who will, in years to come, commit me to my grave!
Mark, and you’ll find the close of spring, and the gradual decay of
flowers,
Resemble faithfully the time of death of maidens ripe in years!
In a twinkle, spring time draws to a close, and maidens wax in age.
Flowers fade and maidens die; and of either nought any more is known.